The Madman of Tsang

There was a great Tibetan siddha called the Madman of Tsang.  He lived in Tsang, which is in East Tibet, near a mountain called Anye Machen, where my guru Jamgon Kongtrul visited him.  This was about five years before I met my guru.  He used to tell us the story of his meeting with the Madman of Tsang, who was an ordinary farmer who had achieved the essence of crazy wisdom.  He had these very precious things stored in his treasury, bags and bags supposedly full of valuable things.  But the bags turned out to contain just driftwood and rocks.  My guru told us that he asked the Madman of Tsang,  "How should we go about uniting ourselves with Padmasambhava?"  The madman told him the following.

"When I was a young student and a very devout Buddhist, full of faith, I used to want my body to become one with Padmasambhava's body.  I did countless recitations, thousands and millions of mantras and invocations.  I used to shout myself half to death reciting mantras.  I even felt that I was wasting my time by breathing in during these recitations.  I called and called and called to Padmasambhava, trying to make my body one with his.  But then suddenly I just realized:  I am--my  body is--Padmasambhava.  I could go on calling on him until my voice breaks down, but it wouldn't make any sense.  So I decided not to call on him any more.  Then I found that Padmasambhava was calling on me.  I tried to suppress it, but I couldn't control it.  Padmasambhava wanted me, and he kept on calling my name." 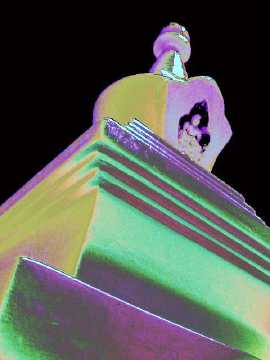 This is the kind of situation we are discussing, I suppose.  Instead of our looking out there for him, he is looking in at us.  In order to make these things real and ordinary in our lives, it seems that we need some kind of conviction in us.  We have to realize that there is a sense of energy that is always there, and that that energy contains totality.  That energy is not dualistic or interdependent; it is a self-existing energy in us.  We have our passion, our aggression; we have our own space, our own energy--it's there already.  It exists without any dependency on situations.  It is absolute and perfect and independent.  It is free from any form of relationships.

That seems to be the point about Padmasambhava here.  The principle of Padmasambhava consists in freedom from any speculative ideas or theories or activity of watching oneself.  It is the living experience of emotions and experiences without a watcher.  Because we are Buddha already, we are Padmasambhava already.  Gaining such confidence, such vajra pride, gives us a further opportunity.  It is not hard to imagine that when you know what you are and who you are completely, then you can explore the rest of the world, because you don't have to explore yourself any more.